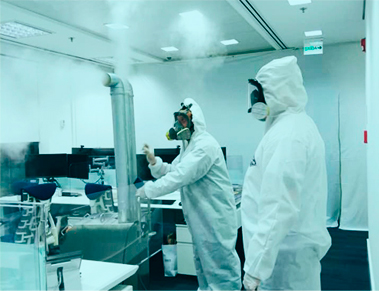 The ultrasonic disinfection device is capable of generating dense clouds of submicron droplets – less than ten microns. The small droplet size allows the sterilant/disinfectant to retain the chemical properties of its liquid source, while still behaving like “a gas”, achieving diffusion and penetration capabilities that are far superior to any other method.

The Appliance offers coverage and three-dimensional (3-D) treatment, ideal for large areas, multiple connected spaces, complex, long and vertical geometries. The result is complete coverage of the environment and treatment of all exposed surfaces. In addition, the submicron droplets allow the process to leave only an extremely thin film deposition on the surfaces, which quickly evaporates at the end of the cycle, leaving a dry post-treatment environment and providing immediate return to the environment.

Cleaning processes in hospitals are complete and demand a lot of responsibility and attention. Therefore, Attuale Brasil works with hospital disinfection, bringing quality and efficiency to these places. Sterilization, on the other hand, is the process that destroys microbial life forms, through chemical or physical agents, applied to inanimate objects. This action has as parameters characteristics such as steam, pressure and temperature.

Undoubtedly, all these processes must be analyzed and observed by a supervisor who validates the service. Because it is a place that requires total efficiency in hygiene, it is necessary to ensure quality to guarantee the desired well-being.

Priority Classes of Sanitation and Disinfection

Sanitation and disinfection actions are separated by priority classes. Thus, before starting the services, professionals identify in which of these areas each place fits in order to carry out proper cleaning. In this case, the areas are:

reviews – These are the places with the highest number of patients in serious condition and with compromised immunity, such as the Emergency Room, Surgical Center and ICU.

semi-criticism – These are the places where inpatients are found, such as rooms and wards.

semi-criticism – These are the places where inpatients are found, such as rooms and wards.

immediate: performed in the emergence of emergencies;

Terminal: is the total cleaning and disinfection after the rooms are vacated. 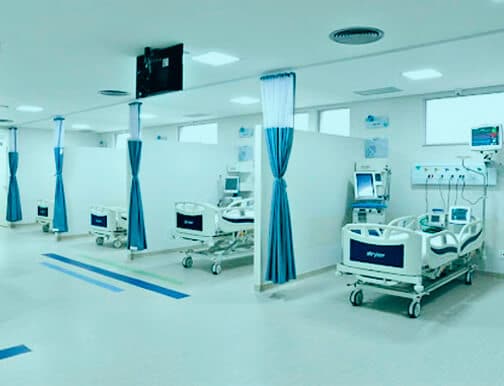 Disinfection of environments is one of the main measures to prevent the spread of diseases. The disinfection process is the elimination of vegetative forms, existing on inanimate surfaces, through the application of chemical and/or physical agents. This is a fundamental measure for the safety of humans and animals.

Clinics, hospitals and veterinary practices are critical areas for the spread of pathogens that can persist on surfaces for years. These sites are reservoirs of multi-resistant antibiotic-resistant microorganisms. Therefore, the correct sterilization of materials and disinfection of environments are mandatory in any and all veterinary establishments.

Outside hospitals and clinics, the risk of contamination of animals is much lower, but it is also significant. There are numerous zoonoses of great importance that can be transmitted in the domestic environment. In addition, some diseases that are not zoonoses but are serious for animals can be spread. As an example, we can mention parvovirus, a very prevalent viral disease with a high mortality rate. Parvovirus is extremely resistant and can stay in the environment for years if there is not a correct disinfection of all the places that the affected animal had contact. Often, the carrier animal has not been in the house for a long time, and when the person acquires another dog, it is affected by the same disease. Simply put, sterilization is capable of fighting bacteria, viruses, fungi and spores, while disinfection is not efficient against the latter. In addition, sterilization refers to small coverage areas, such as pliers and scissors, but not being efficient on walls, floors and ceilings.

In the case of veterinary clinics that offer bathing and grooming, it is necessary to be very careful with cleaning. While dogs are more used to bathing, cats generally use nail clipping services more. Thus, it is very important that the pliers used in the procedure are properly sterilized before each use.

Between each clipping, the practice of complementary hygiene is essential. Otherwise, it is possible for the animals to be clipped to be contaminated, especially if their vaccination is expired or they have a weakened immune system.

The pet shop is an expanding sector here in Brazil. In 2017 alone, there was a growth of 7% in the sector, even with the economic crisis the country went through. The point is that Brazilians have not given up on their domestic companions, even in times of crisis. According to the IBGE, Brazil has the fourth largest population of pets in the world. To give you an idea, there are 52 million dogs and 22 million cats.

And with so many animals in Brazilian homes, it is more than natural to think that veterinary clinics would spread across the country. That's why the concern with proper cleaning should always be a priority for anyone who wants to open or maintain a clinic focused on animals. 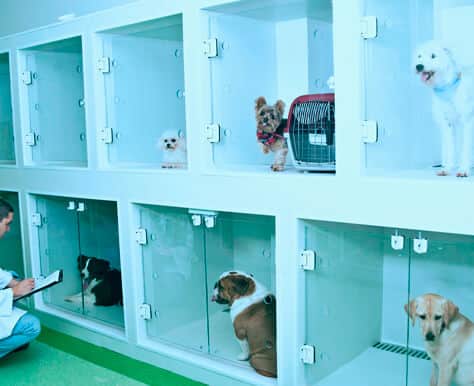 The benefits of proper hygiene are related to the health and safety of pets. For the owners of these spaces, it is also a way to ensure the success of their establishment, presenting a good image to customers. This is because the quality of cleaning and hygiene of the space is one of the factors that are essential when owners choose the clinic or pet shop for their companions.

Did you know that your health could be in danger?

Cities like São Paulo, Rio de Janeiro, among countless others in our country, have long histories, as they were founded right at the beginning of Portuguese colonization. This has made many of its buildings old, in part because of the continued use of these buildings, and also in large part for historic preservation. Of course, the buildings are not as old as the city, most of them date from more recent periods with something around 40 or 50 years old, but the historical factor shows a culture of preservation of the citizens, which is very positive for the city in terms of of tourism, knowledge and cultural heritage.

The problem is when these buildings, some not so historic just old, have health problems that are not immediately noticed, as they are structural health problems, a disease of construction, so to speak. One of them is SED, Sick Building Syndrome. According to the World Health Organization (WHO), EDS is defined as “a set of diseases caused or stimulated by indoor air pollution”. These closed spaces, for the most part, are the large buildings which began to appear in the 1970s and today are the places where we spend most of our time. In extreme cases, we even have constructions from the late 1930s. Public service buildings or older companies in the center of the city, and even residences, are the main focuses of the SED.

According to experts on the subject, EDS does not cause disease, but it can contribute to aggravating ills in predisposed people or even cause a transient state. That is, when these people leave the buildings considered to have EDS, the symptoms disappear.

In another line of reasoning, EDS can cause some shared ills (or diseases). A classic example of this is the case of the aforementioned collective contamination of a hotel in Philadelphia (USA) in 1976 by the killer bacterium Legionella pneumophila, which caused a rare and severe form of pneumonia.

One of the big problems is that we don't have an idea of how many buildings today suffer from it, in big cities. This is a difficult data to acquire, perhaps for fear of those responsible for the administration of buildings and condominiums in passing on the information. However, according to the WHO itself, at least 30 % of buildings worldwide suffer from EDS. In Brazil, this number can reach 50 %. These are alarming numbers, but they do not touch the competent authorities, surprisingly.

With the COVID-19 pandemic in 2020, numerous closed places such as law firms, banks, universities, shopping malls, large and medium-sized companies began to adopt the Disinfection of their areas to contain bacteria and viruses, with Attuale Brasil being the first company to meet this demand at the beginning of the pandemic.

This website uses cookies to improve your experience while you navigate through the website. Out of these, the cookies that are categorized as necessary are stored on your browser as they are essential for the working of basic functionalities of the website. We also use third-party cookies that help us analyze and understand how you use this website. These cookies will be stored in your browser only with your consent. You also have the option to opt-out of these cookies. But opting out of some of these cookies may affect your browsing experience.
necessary Always Enabled
Necessary cookies are absolutely essential for the website to function properly. These cookies ensure basic functionalities and security features of the website, anonymously.
Functional
Functional cookies help to perform certain functionalities like sharing the content of the website on social media platforms, collect feedbacks, and other third-party features.
performance
Performance cookies are used to understand and analyze the key performance indexes of the website which help in delivering a better user experience for the visitors.
Analytics
Analytical cookies are used to understand how visitors interact with the website. These cookies help provide information on metrics the number of visitors, bounce rate, traffic source, etc.
Advertisement
Advertisement cookies are used to provide visitors with relevant ads and marketing campaigns. These cookies track visitors across websites and collect information to provide customized ads.
Others
Other uncategorized cookies are those that are being analyzed and have not been classified into a category as yet.
SAVE & ACCEPT